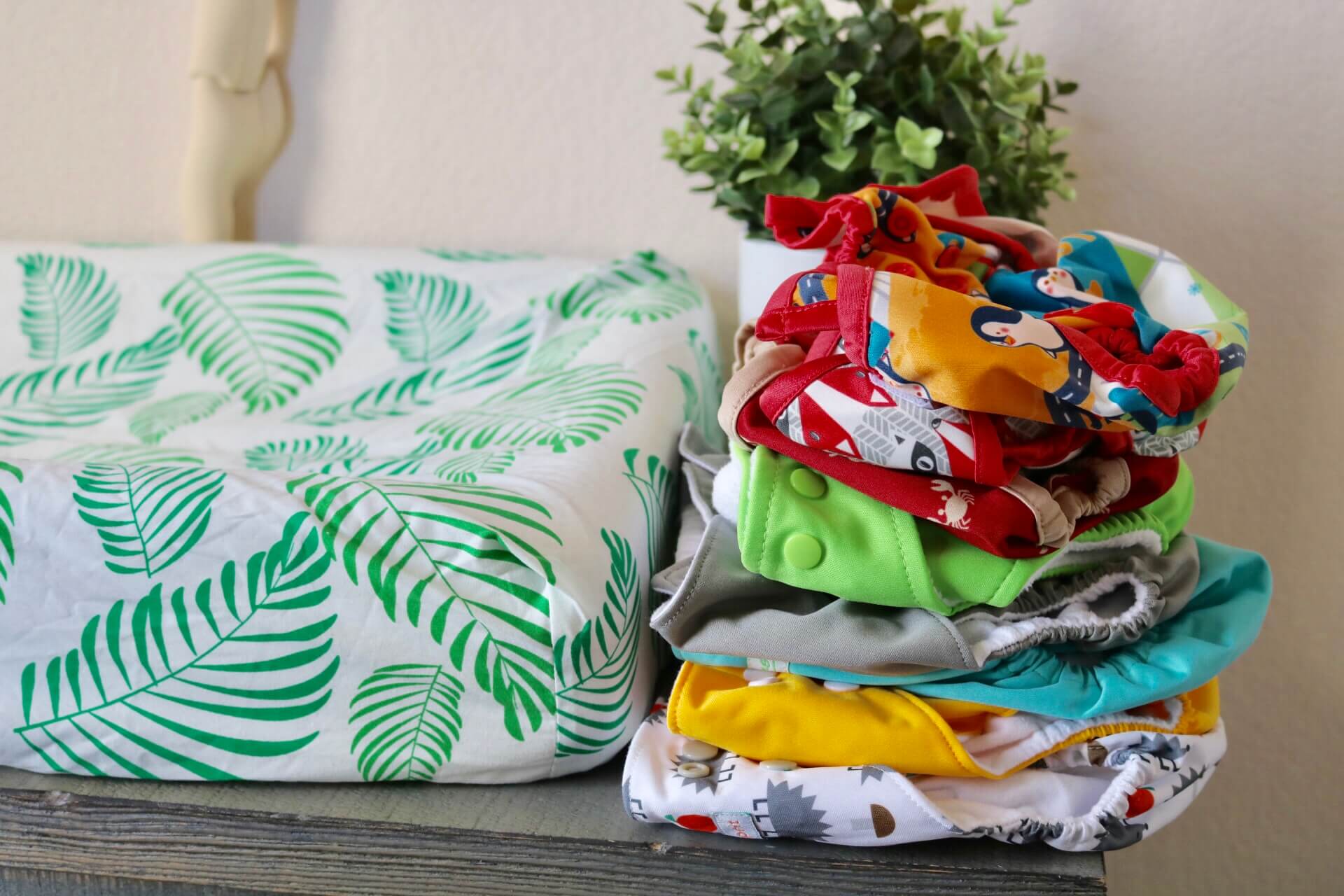 Many parents are intrigued by cloth diapering but are not sure where to begin. This can be overwhelming at a time when there’s already so much to learn and prepare for, so I wanted to give an overview of what I’ve learned that made me confident that we can successfully cloth diaper our twin boys.

There are basically two styles of cloth diapers – a two-piece system, which there are two types of, and an all-in-one system.

A two-piece system has inserts that either just lay in the diaper or go into a pocket of the diaper.

With the first type of two-piece cloth diaper, you would start with a diaper cover made of thin water-proof material and lay your absorbent insert inside before snapping the cover together around the baby. So that the insert doesn’t move around, some people use key-like hooks that hold the insert in place.

Then when needed, you would take that insert out and wash it and be able to reuse the cover if it did not get dirty. This is also how cloth diapering services work. They bring you the inserts to put into the diaper, then pick them up when dirty and deliver clean ones, and you would provide your own covers to wash yourself. 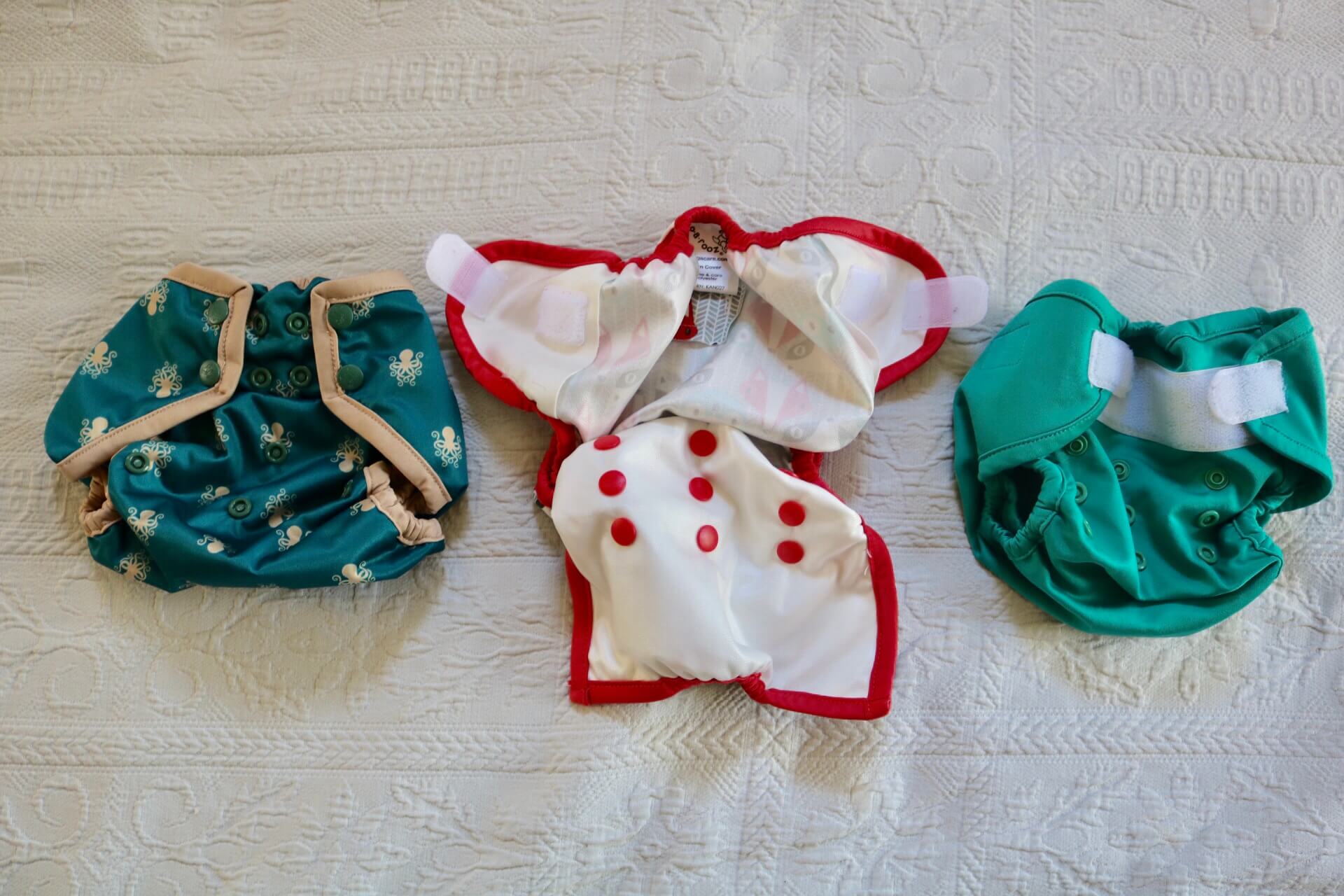 The other type of two-piece cloth diaper looks very much like the cover and insert type, but it has a second layer of fabric creating a pocket inside of which the insert is placed. Instead of laying the insert into the cover, the inserts get placed inside the pocket of the diaper before use and taken out and washed with the cover each time. A lot of the inserts that come with cloth pocket diapers are microfiber, so you wouldn’t want them against the baby’s skin, which is why it goes in the pocket.

The all-in-ones are exactly what they sound like. The cover and the insert are actually permanently sewn together. So once the diaper is soiled, you wouldn’t take the insert out but rather just throw the whole thing into a dirty hamper.

The downside of the all-in-one cloth diapers is that they only get one use from them. With a cover and an insert laying on the inside, if your baby goes to the bathroom and the cover is still dry and clean, you can actually just put a new insert in and reuse the cover. With the all-in-ones, there’s no getting around a dirty diaper because it’s stuck in there.

So while it’s much easier to put together, you have to change it every single time. This is also the same for using the inserts inside of the pocket diaper instead of laying it on top.  And for us, because we are going to have two boys, I passed on the all-in-one diapers because we would need so many per kid versus if we were having one baby and could probably stock up and get enough for one to two days. But babies go through a lot of diapers, and I’m multiplying that by two, so we went with the covers so that if the diaper isn’t completely soiled, we can just keep switching inserts and not have to buy as many covers.

So that’s the difference between just the shell, the shell with a pocket, and the all-in-one diaper. If you use the insert in the pocket, it becomes basically like an all-in-one diaper and you have to wash it every time. We plan on using the insert on top of the cover.

The second option that you have with cloth diapering once you decide whether you want just covers, covers with pockets, or actual all-in-ones is the closure. This is something we’re actually debating on. Velcro clearly sounds quicker than using snaps on wiggly infants, which I can imagine takes a little bit of time finagling and a little bit of sorcery at some points. But I have heard a lot of stories that as babies get older and they get a little more fidgety and a little bit more independent, they have the ability to just rip their diaper off very easily. 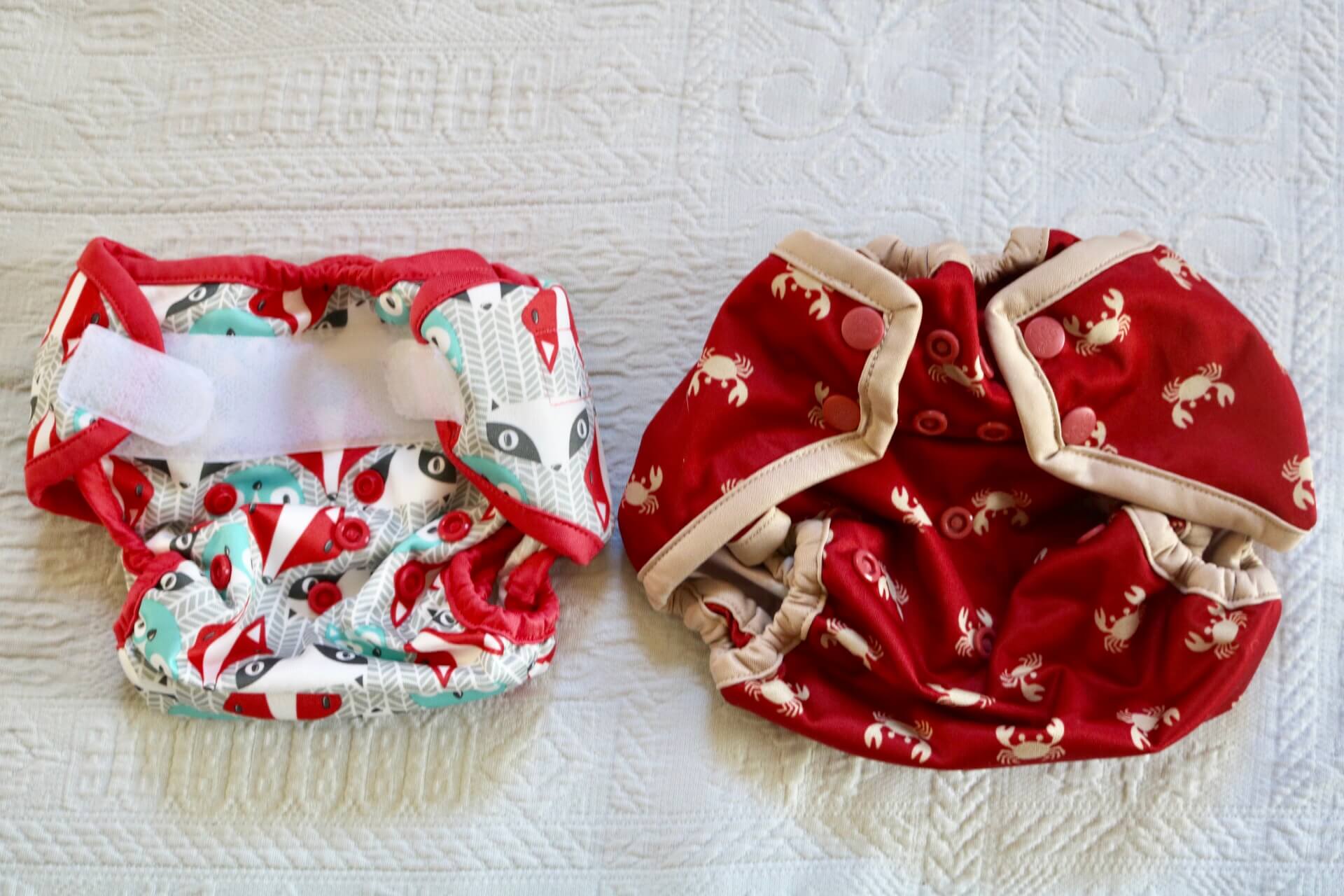 Most brands offer snap closures. These have the adjustable snaps up and down on both sides, but you have to snap the baby into them every single time. These are very secure once they’re on, though. Your baby is not going to be able to just rip the snaps off because they take a lot of force.

Then there are these sweet, really quick and easy Velcro diapers. You can take them on and off in seconds and I love these for infants. I think that this is a great option before your baby learns to take off their diaper because they come on and off quickly and I think you’ll do a lot less fiddling with the sizing of it. It’s just very easy to move back and forth. With snap closures, once you snap them and you have to unsnap them and snap them again, I think that can get frustrating if you have a wiggly baby.

So while we got both varieties, I got more of the Velcro ones for when our babies are in the smallest sizes. I do not want an incident where either (or both) of the babies are ripping their diapers off, especially in public. For this reason, we chose snap style closures for the older sized diapers.

I did hear that Velcro kind of starts looking shabby because everything adheres to it, but some diapers actually have an inner Velcro so when you wash them, you just put the flaps down and they don’t collect lint in the washer or dryer. That’s a great little hack they put into the diaper.

The last option to consider on cloth diapers is sizing. I imagined there were several sizes like there are with disposable diapers, but the adjustability features of the Velcro and snaps actually allows one size to be used for longer as the babies grow. For us, we went with two sizes of diapers.

We went with these tiny, tiny infant diapers and that is because our boys will probably be on the smaller side. We hope that they get super big, but we know the average twin is born at about five and a half pounds. And so even if they were on the larger side, they probably wouldn’t be really big babies.

And then we got a second size, which are for babies 12 to 33 pounds. The ones we have are by the Bumkins brand and there are tons of other brands that make this size. Bumkins brand is sold in a baby boutique by where we live called Zoolikins in Scottsdale, Arizona. It’s really an amazing store. Bumpkins is their parent brand and that’s actually who taught the cloth diapering class for free for us. It was really great, and so I got some covers from them as well in the larger size. 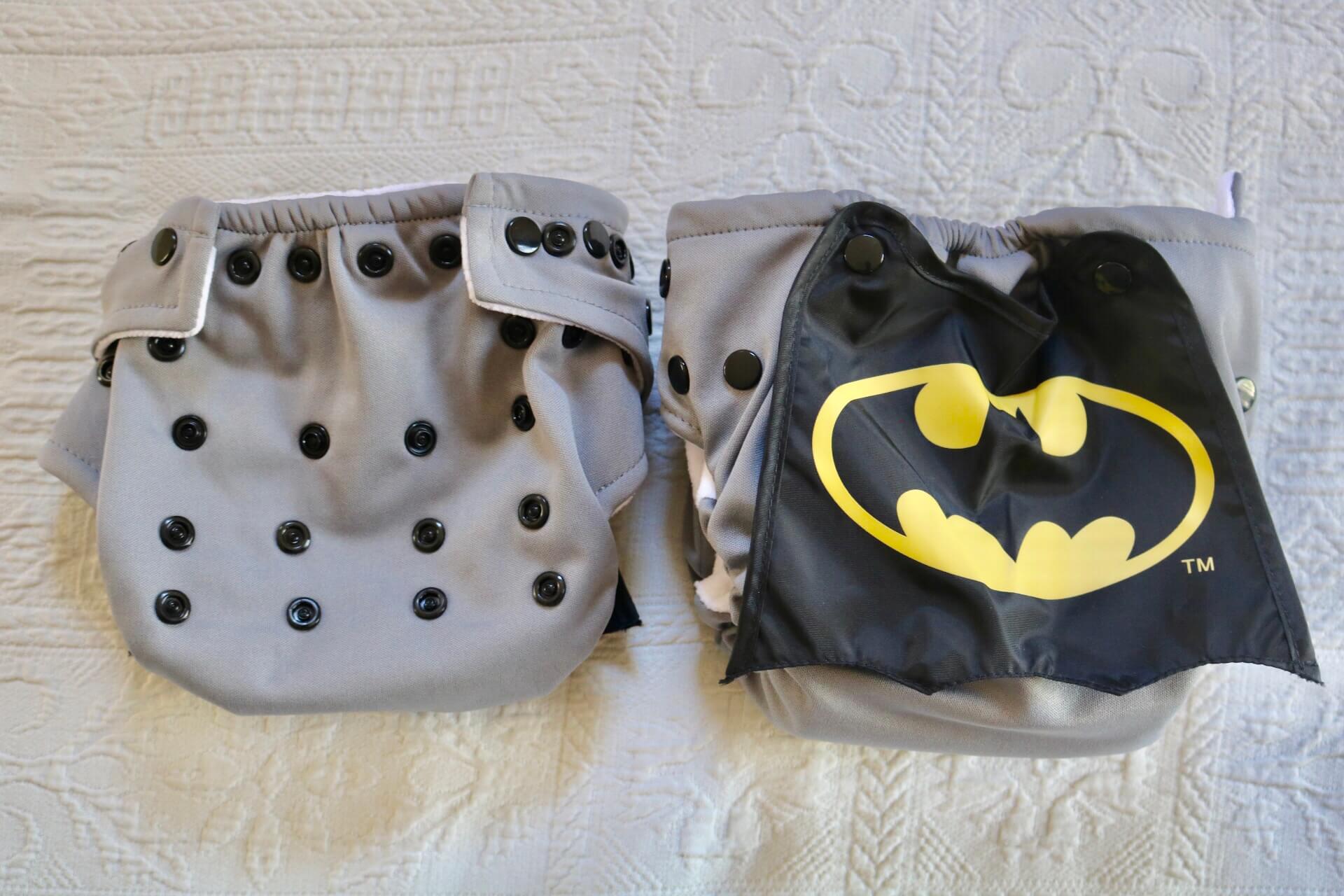 I also love that Bumkins makes very unique diapers like ones with a little superhero cape. When I saw this I was like, you’ve got to be kidding, this is the cutest thing I have ever seen. They also have them in other colors and other superheroes such as Wonder Woman. I think this is going to be adorable when they’re running around and their little butts have capes on them.

So that is the sizing of the cloth diapers. The best brands for the tiniest sizing I found was Alvababy and Rumpazoo. I’ve seen some brands like Bumkins have multiple sizes from really small to medium to toddler, where others just have 12 pounds and under and then 12 pounds and up. What determines how much they can stretch or how many pounds they can go to are all of these snaps. And so the more snaps, obviously, the more sizes that you can go up to.

I learned in the cloth diapering class about the different types of inserts. The type you go with is determined by your service if you use one, or the types of diapers you choose to use. 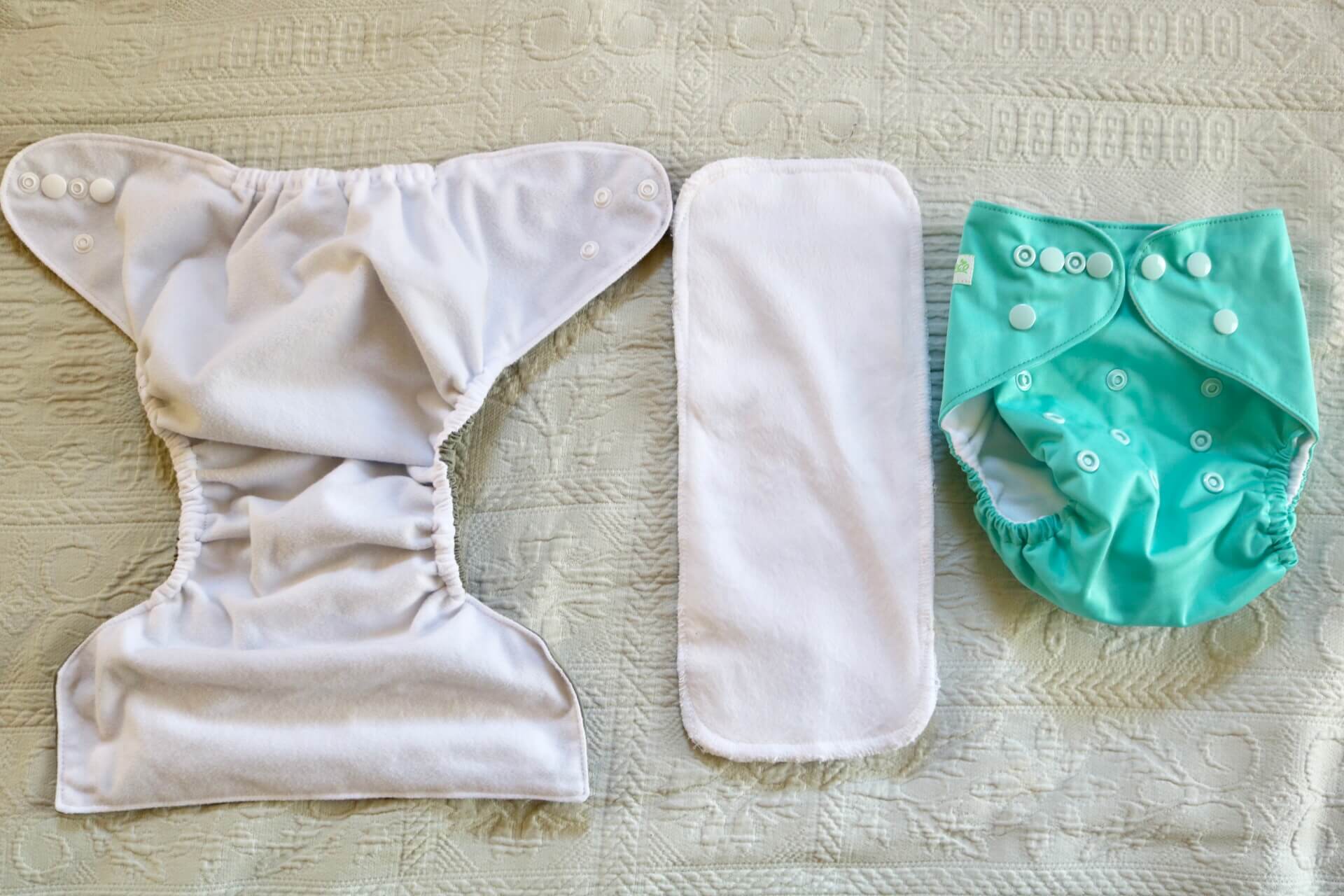 Cotton inserts are what a diaper service is going to use and what I would consider to be the best option if you’re doing the pre-folds. With pre-fold inserts, instead of a large sheet that you have to fold to fit in the diaper, it’s already folded into two or three layers and sewn down. That’s what you’d get with a cloth diaper service, and they’re also available to buy. They’re probably the most popular option since they can lay inside the cover or inside the pocket.

With all-in-ones, you don’t have to worry about this because they have their own inserts. They will be whatever the diaper is made out of on the inside but will be safe to sit against the baby’s skin unless otherwise stated. However, some people do tell me that they double up and put an extra insert in for overnights or when the baby is sleeping more than just a couple hours.

Hot on the cloth diaper market, and really everywhere, is bamboo. You can get stacks of bamboo inserts in so many varieties, including organic ones and ones that have a ridge designed for fewer spills. I think you can lay these in the covers or on top of the pockets, but I would double-check with the manufacturer to make sure that it won’t irritate the baby’s skin. If they can’t be against the baby’s skin, they would have to be inside the pocket of the pocket diapers.

So there are quite a few different types of inserts. I do think the cotton pre-folds are the most popular with bamboo probably coming in second. Bamboo is more sustainable than cotton and so people are definitely going that way. If you use a cloth diaper service, you’ll obviously be using whatever they provide, but those will all be able to sit against the baby’s skin.

I hope you feel confident knowing this information and being able to decide what type of cloth diapers will work best for you. It’s really great for your baby and really great for the environment. 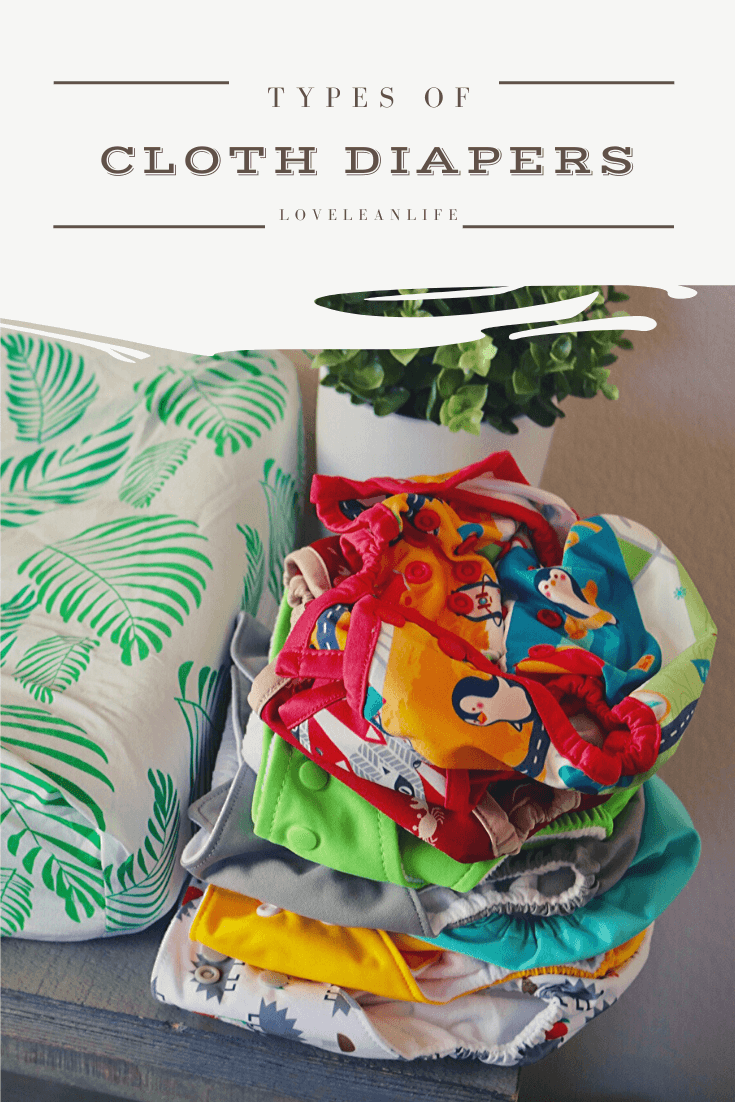 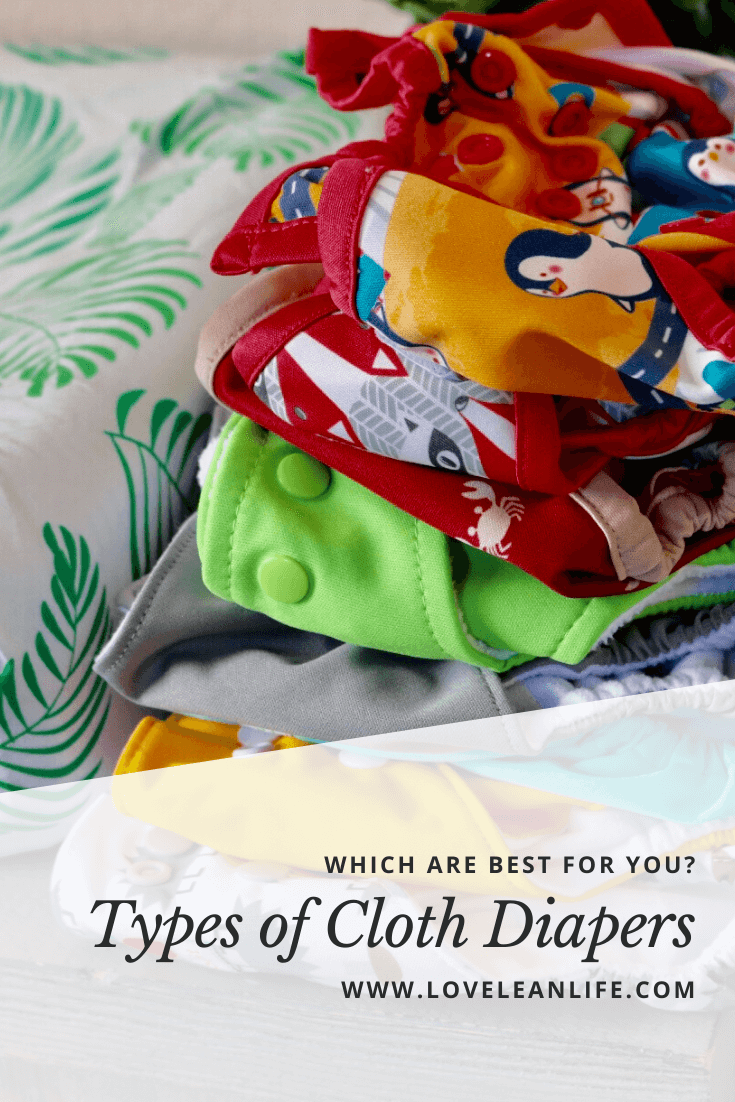 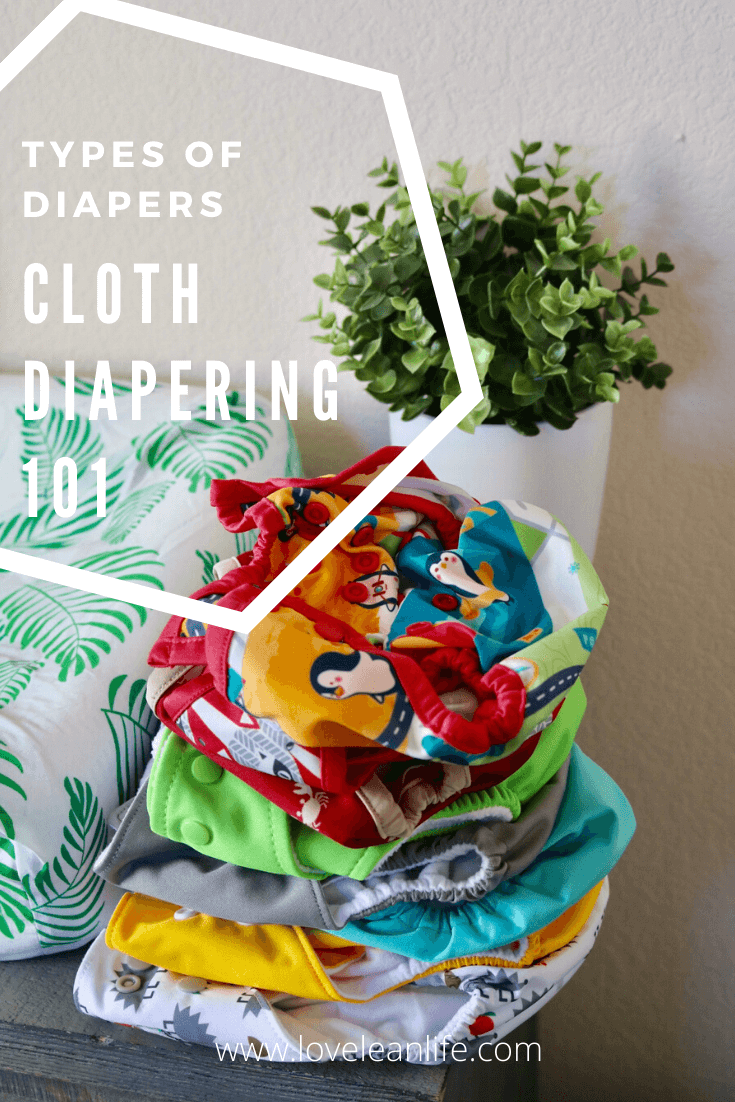 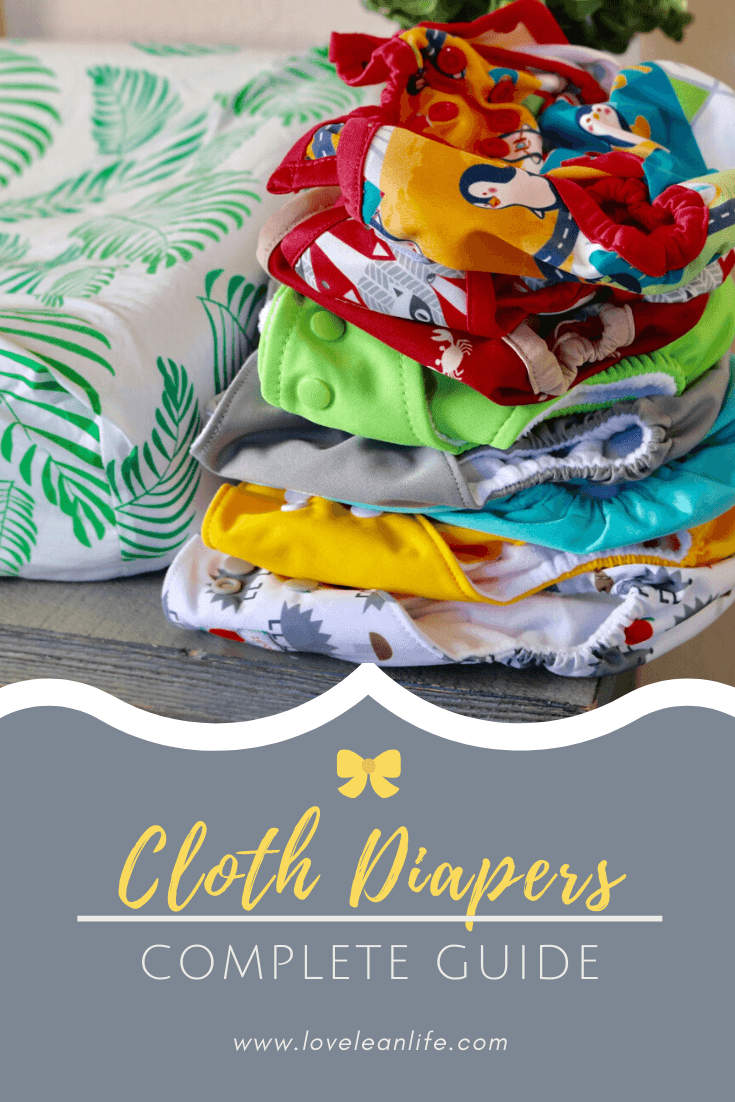