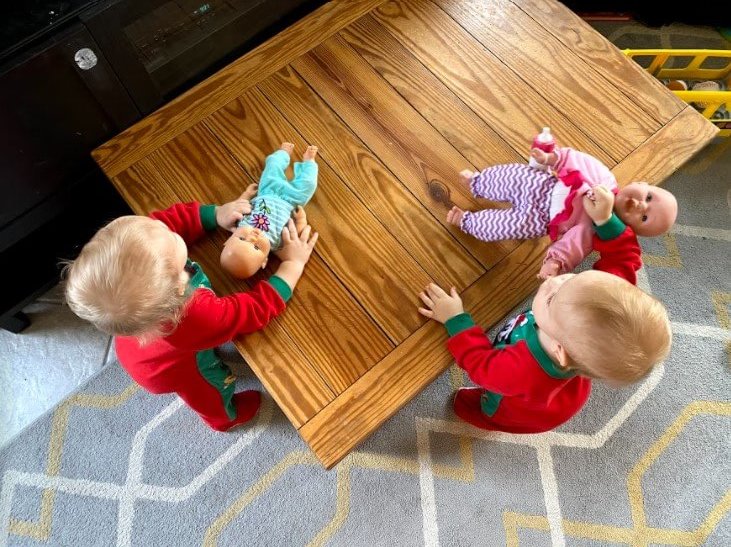 Buying baby gifts when our twin boys were under one was easy and consisted of soft toys, teethers, rattles, and activity gyms. Now that they are just over one they are starting to really interact with their toys, but haven’t developed enough language or strong preferences that they can tell us what they specifically like to play with most.

Instead, I have been watching them for the past couple of weeks and watching what they’ve shown a lot of interest in now that they are 16 months. So, I composed a list of their favorite things right now, and toys that they’re about to grow into. Toys they can grow into are ones they’re starting to play with in ways that the toy was specifically made for.

My first gift pick is sound books because our babies really enjoy being read to. They also love pushing the buttons themselves now instead of me doing it. When they are reading on their own or together with a book, one is pushing buttons while one is turning pages. I think they might even realize certain sounds go with certain pages. They can’t quite put it together yet with the specific button for each, but they are becoming more interactive with us when we are reaching for the correct buttons.

One of the things that gets the boys really into the books is us pointing to the picture in the book and then pointing to the coordinating sound button and going back and forth. The enjoyment they get from these types of books is enough for us to put these at the top of our gift list.

There are real things our babies love to play with or are enamored with that we don’t want them putting in their mouths like our phones, keys, or even the remote control! They see us using these things throughout the day and know they have some significance in our lives. This makes them want to learn how to use these things too.

For the remote, we saved an old remote from when we moved into our new house (and lost what is controlled or gave it away – who knows) and took out the batteries so they could play with it. Because it is a real remote they were very drawn to it and were pointing it and pushing buttons.

They also like lookalike versions of our cell phones or iPad, that have sounds and music on them. We received play tablets from a friend of ours that plays animal sounds and plays a lot of songs the boys love. We also received a gift of a baby cell phone that looks like the iPhone with the same shape and a touch screen. The boys really love pretending to talk on it and holding it up to their ears.

They also have a set of keys that can be frozen into teething toys. While they don’t look much like our real keys, they still love them.

The third gift idea that we’re going with this year is the gift of baby dolls. We have two little boys and I actually never considered baby dolls for them until somebody very generously gifted us two baby dolls for them to play with. They immediately loved the dolls and they just carry them around all the time. Fast forward a couple of months into having the baby dolls, and one day I looked over and saw one of the twins feeding the baby doll with a fake bottle.

I realized this is one of those cases where they’re learning to play with the toys differently. And I’m realizing that they’re actually growing into this toy in a way that makes it more real to them. At first, they just carried the baby doll around. Now they are learning to care for another being through caring for their baby. When they first got the baby dolls they would throw them down or step on them in playing. Now I’ve even seen them kissing the baby doll on the head the way we kiss them on the head. I realize they are in a phase of learning how to care for other people.

I think that this is a great age to introduce baby dolls to the boys. And I know a lot of people have said they didn’t give their kids dolls but just seeing the way that the boys are interacting with the babies, I think it’s really cute and so we will definitely be considering getting them another doll or even maybe just accessories like a spoon and a fork or even diapers or clothes for them to play with.

The boys are also at an age where peg puzzles and chunky puzzles are super fun. The only thing is they’re still rampant chewers because they are both teething like crazy so we do have to watch that they are not gnawing off pieces of the puzzle. 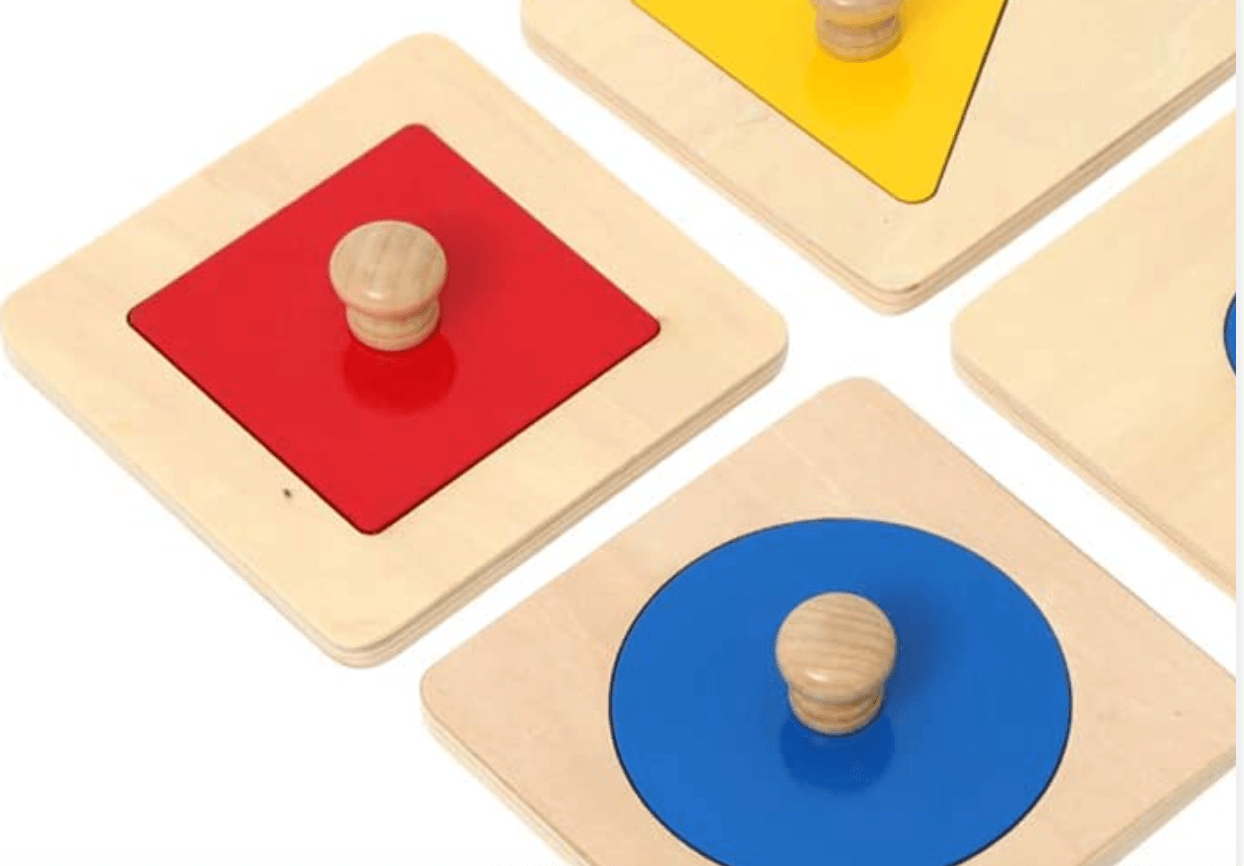 We have a puzzle that has really large pieces in it with singular pieces that go in and out of one slot that is the right shape. It had some cars, trucks, and planes on it. They were chewing it pretty badly so we took it away for now.

They do have a shape puzzle that I found online that they are doing better with. And so we are going to introduce more of these types of puzzles to the boys, because they have shown interest in finding more things fit. I really think this is a good time to introduce them to a toy like that. [Update: The boys really enjoy the one-shape puzzles and now have a puzzle ball that is similar to a nesting doll, as well as a shapes cube that we are working with them pushing shapes into the right size holes all around the wooden cube!]

If your one year old is walking pretty steady then my first activity sets are a perfect gift. The boys are more sure on their feet and have been balancing better and I think it’s a great time to introduce toys that are activity-based or sports-based. 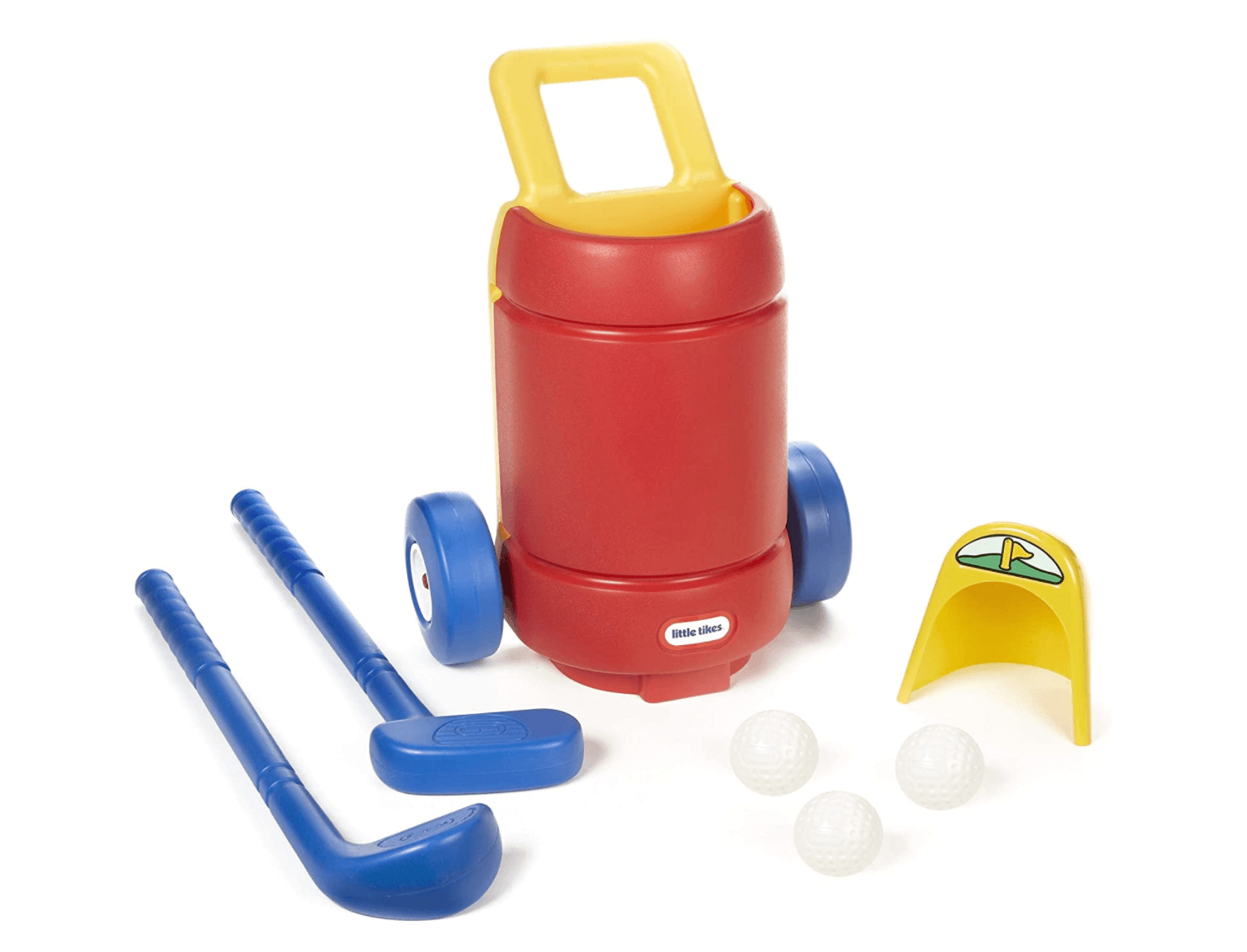 Now is the time they’re learning to put steps together, move in new ways, and combine new hand motions. They’re starting to throw or roll things like balls back to us. They’re even starting to kick at a ball. It’s not super coordinated but I see the interest in learning this coordinated movement and so we got the boys their first set of golf clubs which will help with their hand-eye coordination.

I also see my friends and family getting their kids this age their first hockey sticks, soccer balls, and basketball hoops. While they may not be meant to turn your kid into a pro athlete, it’s definitely good because they’ve got the upright stability to walk and do other motions at the same time.

The boys got a basketball hoop for their birthday and it’s a really short basketball hoop that they can drop the ball into. I think that once your kids are walking and they’ve got a little more stability it’s the perfect time to introduce those my first sports kits. 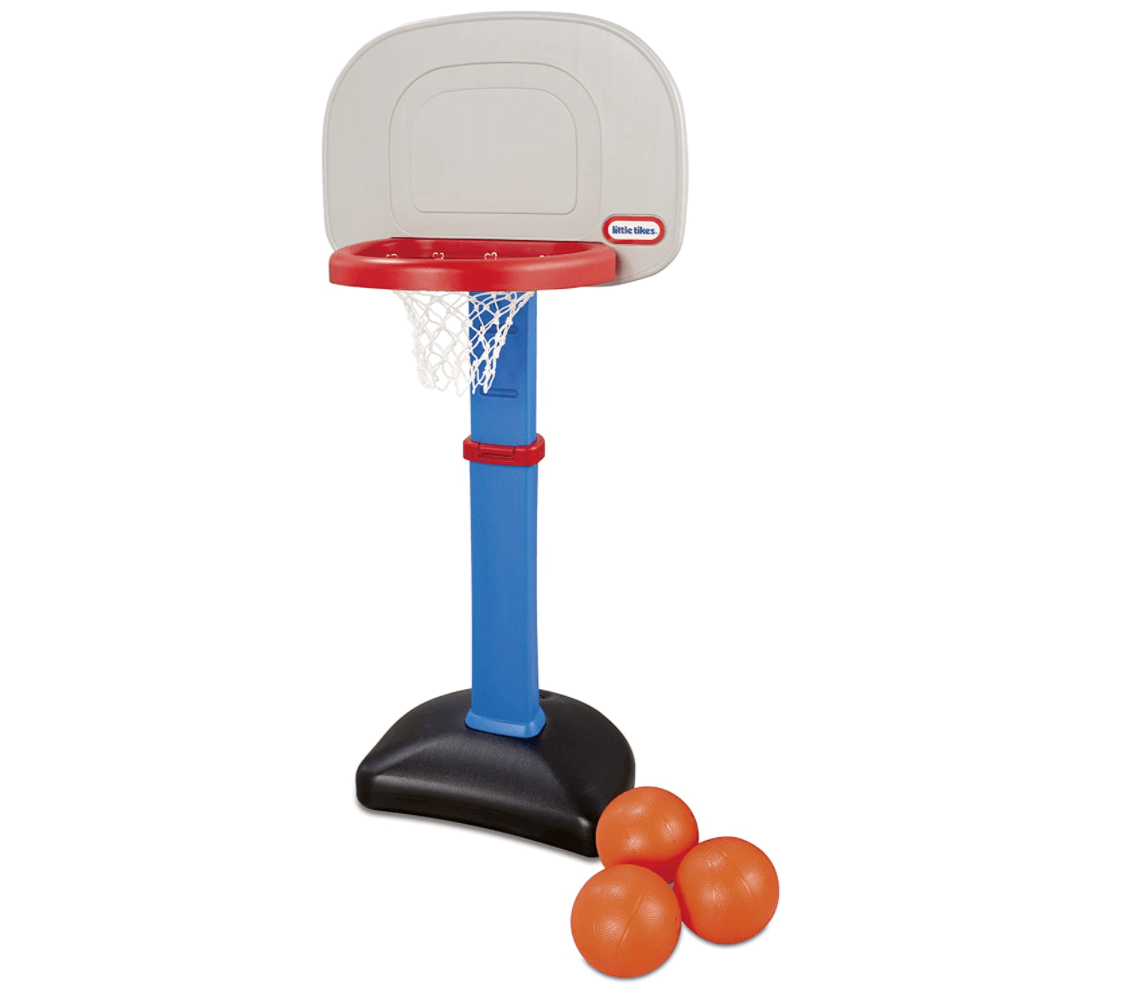 All of these gifts were what I came up with after the last month or two of just watching how the boys are playing and changing as they develop and seeing the new ways that they’re playing with the stuff we already have.

I hope that these gift ideas gave you a good idea of what you can get for a one-year-old to explore! We did a lot of just sitting back and observing since they can’t tell us what they want yet, but they’re no longer just holding objects for entertainment. They’re suddenly finding a whole new world of play!

What was your favorite thing that you ever got your kid for Christmas or a birthday that they were just crazy wild about that you are so excited that you purchased? Let me know in the comments below! 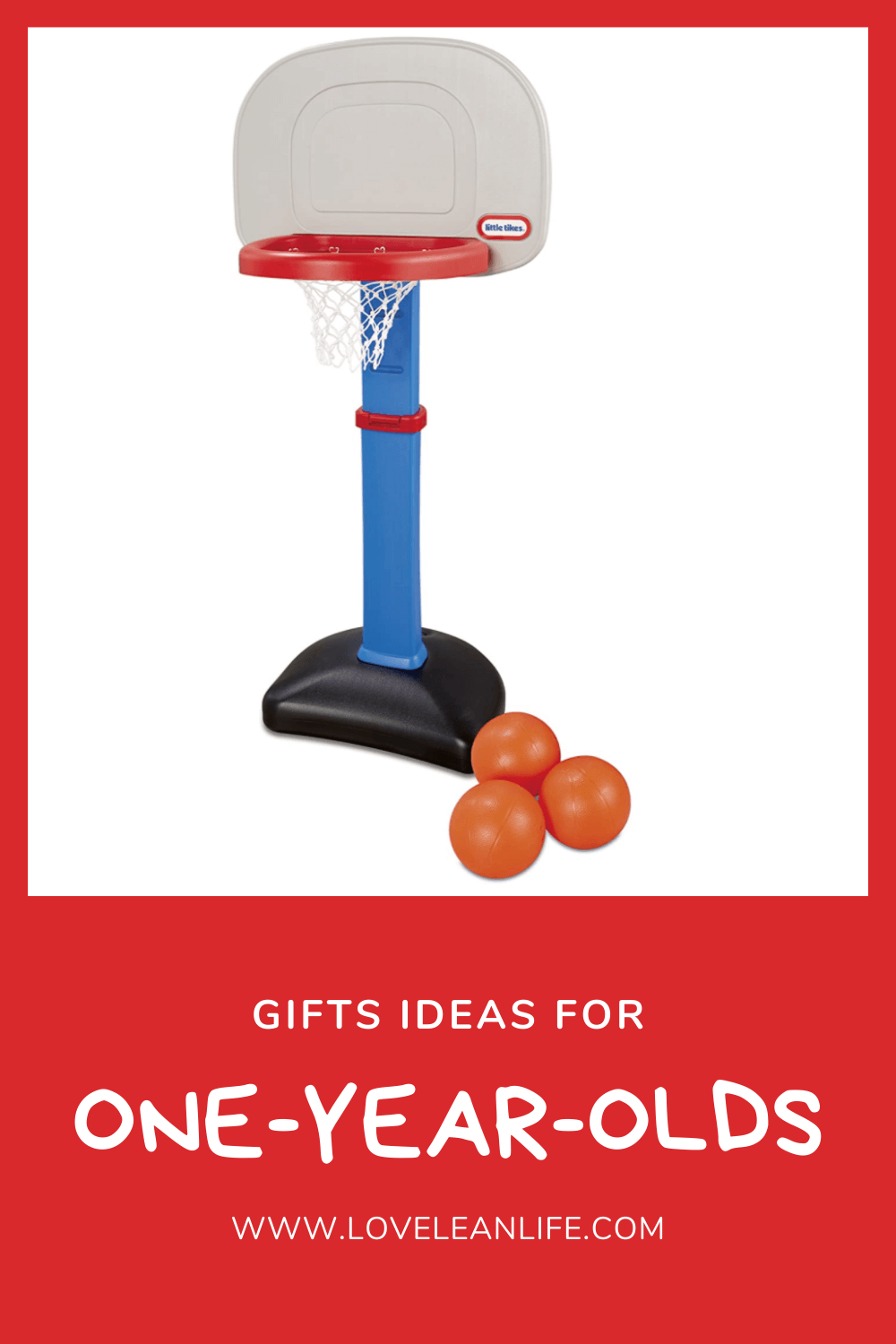 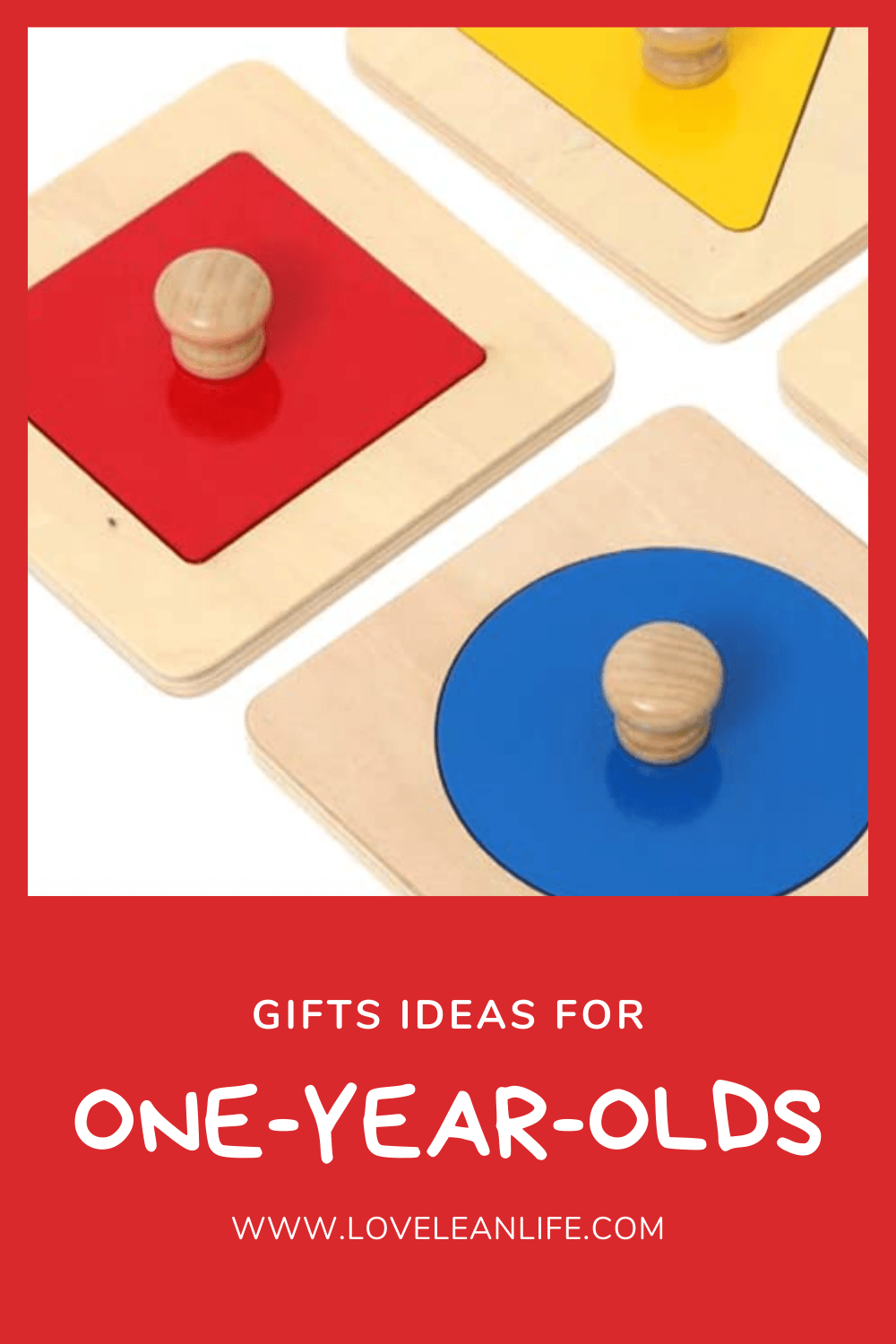 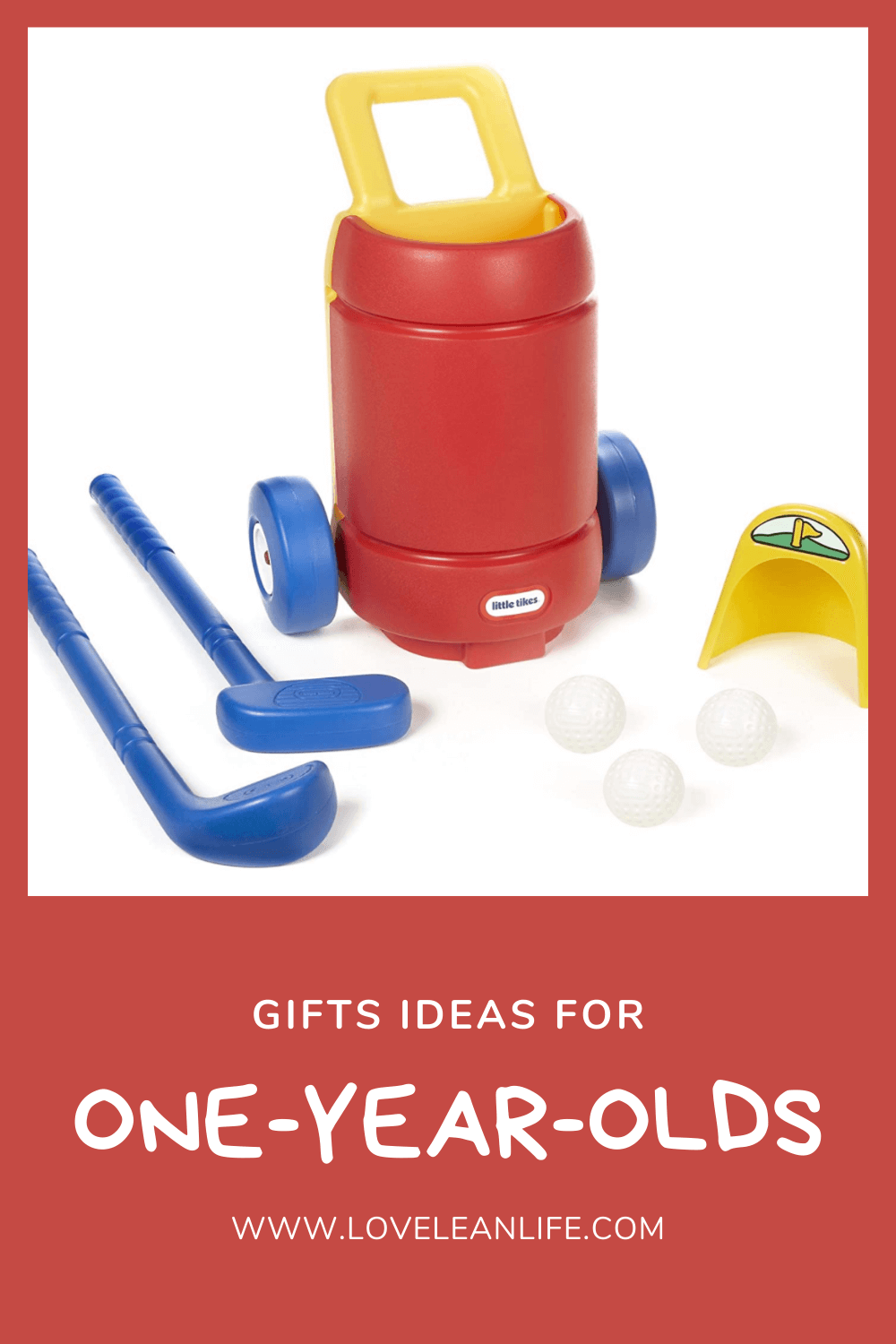 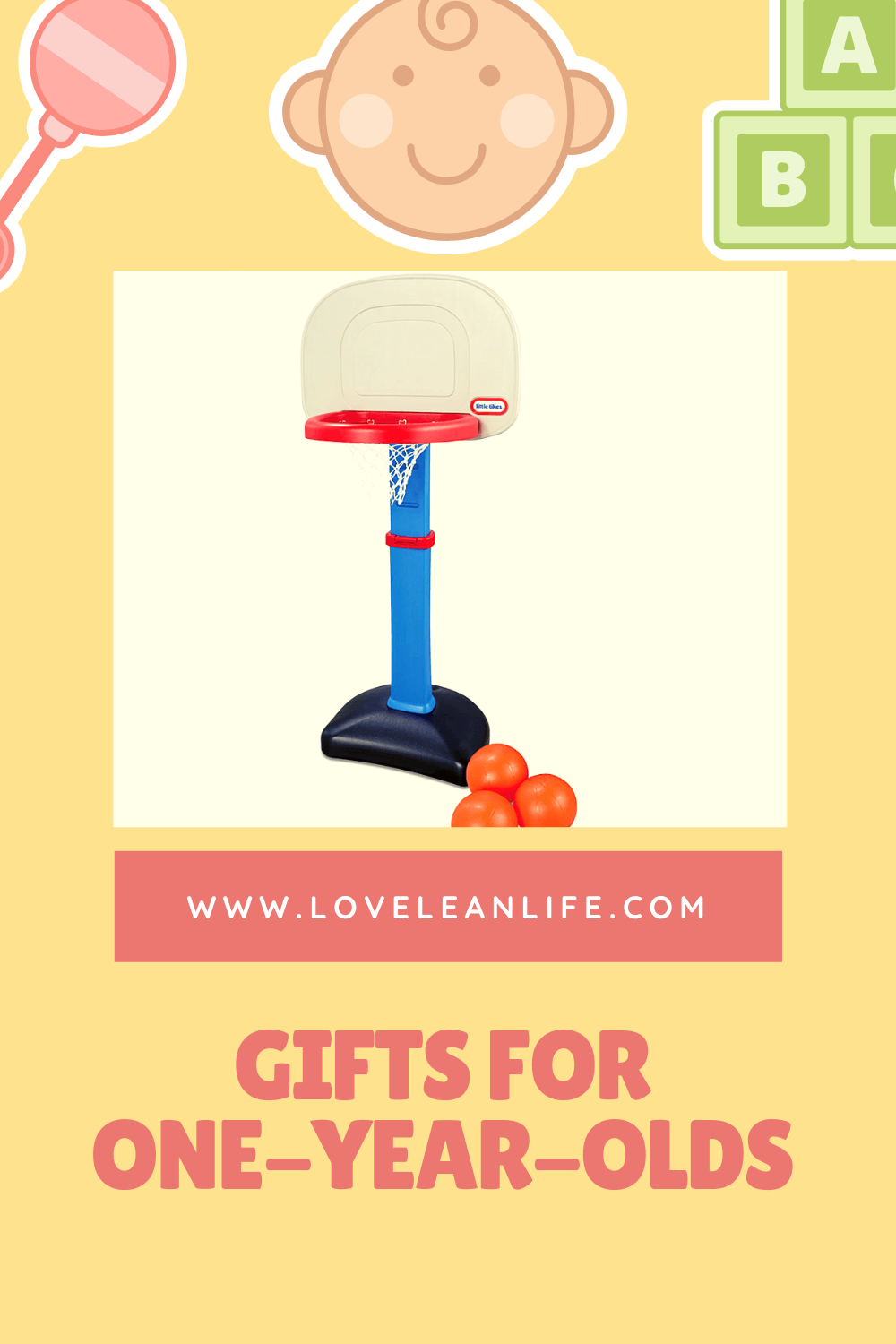 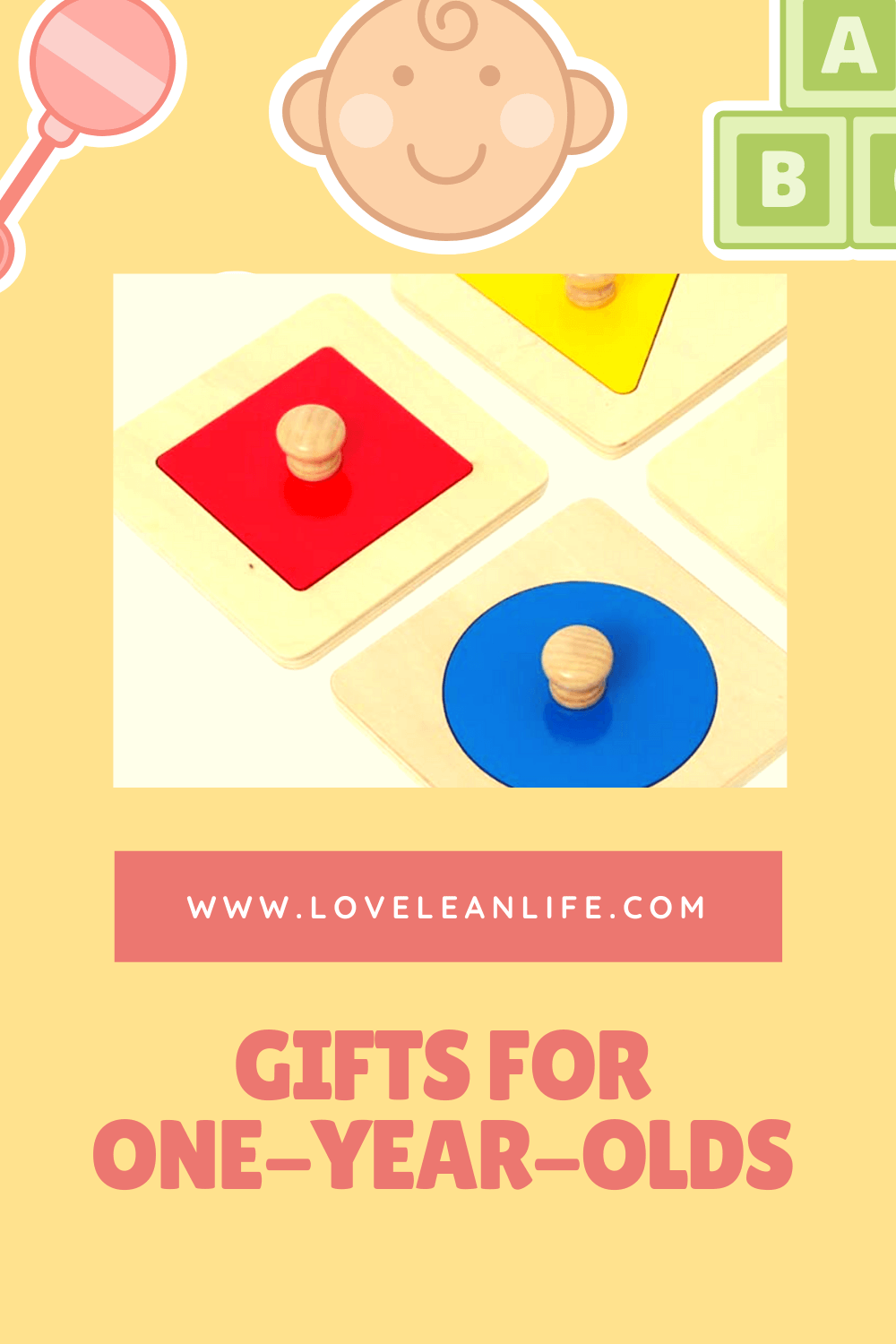 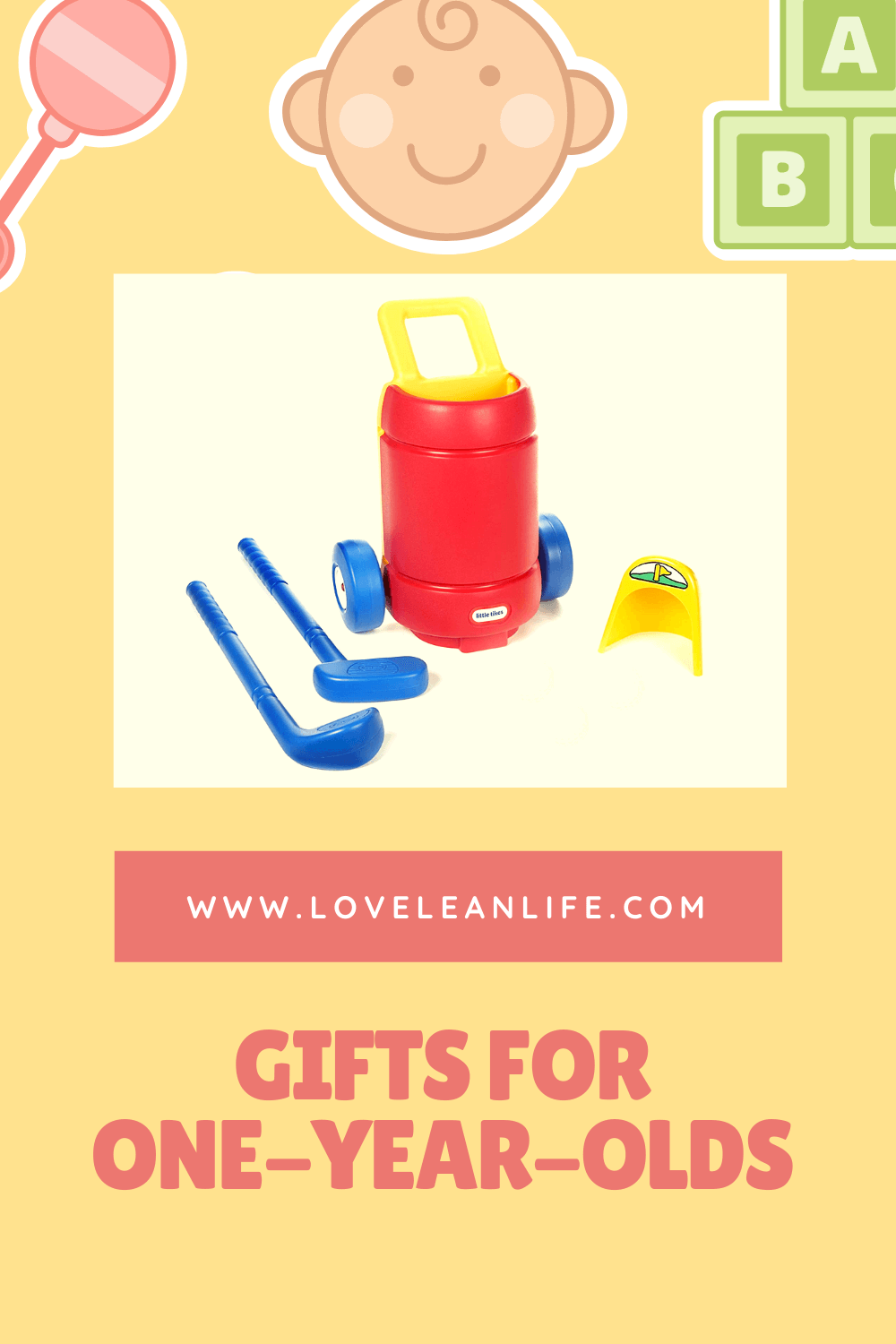 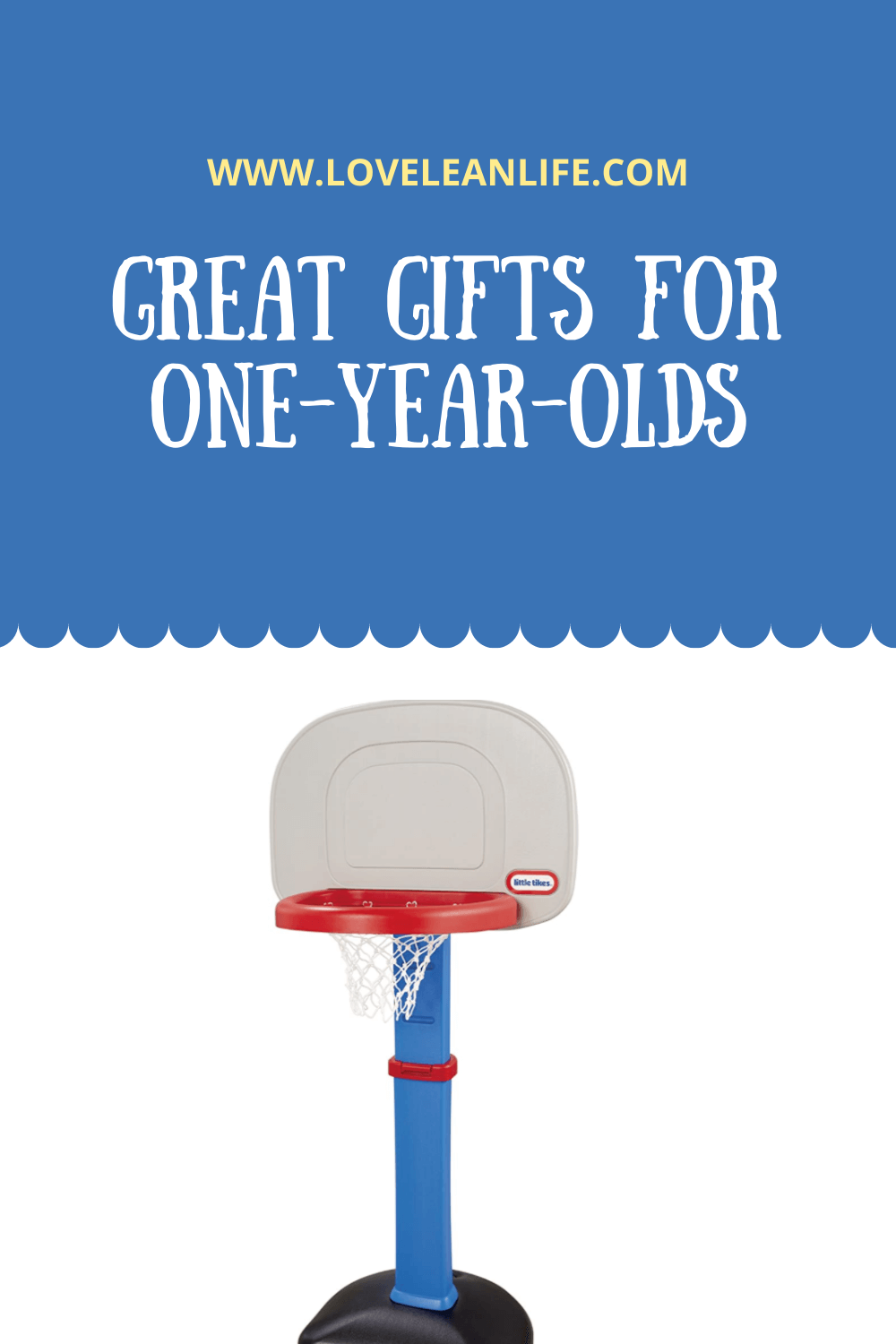 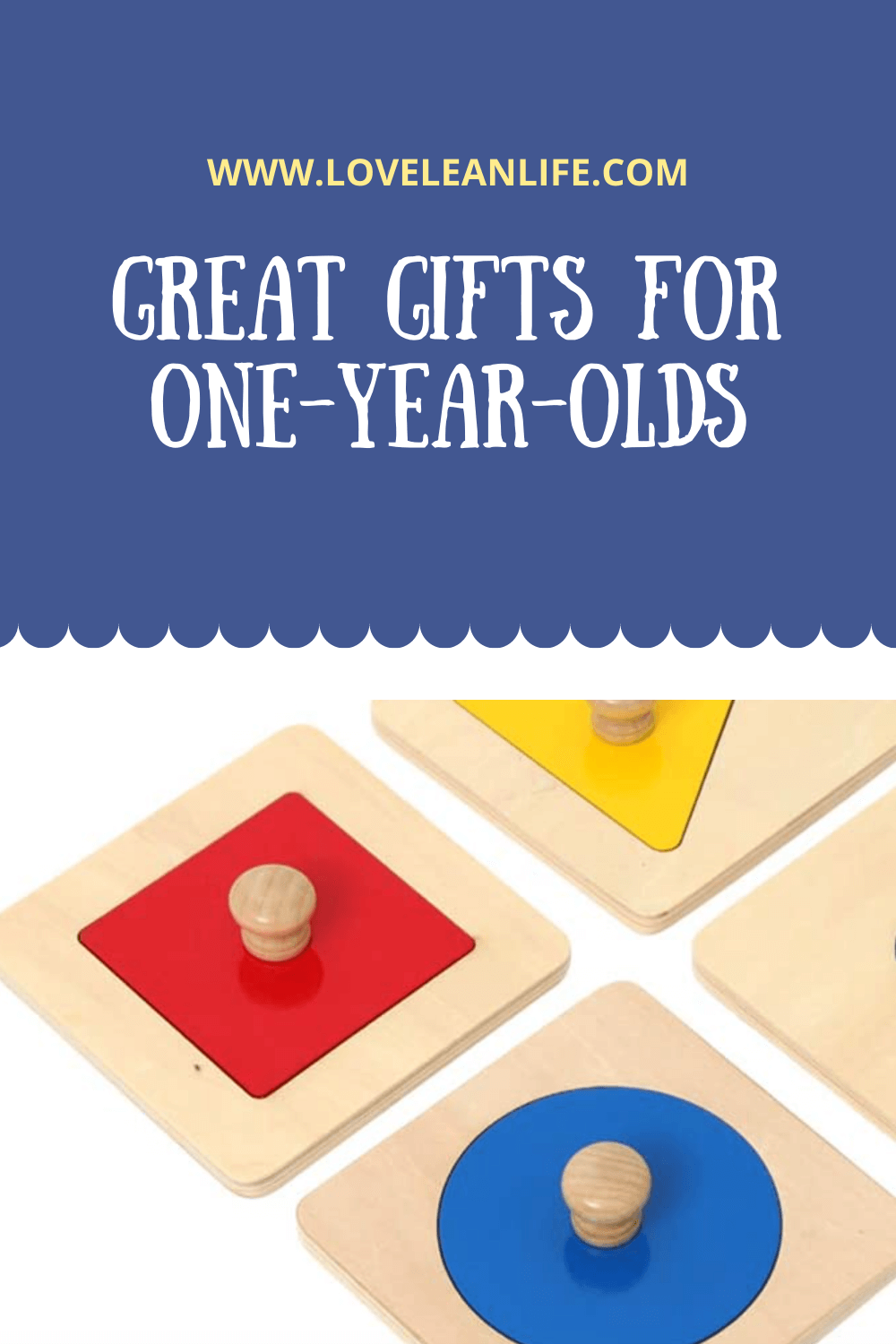 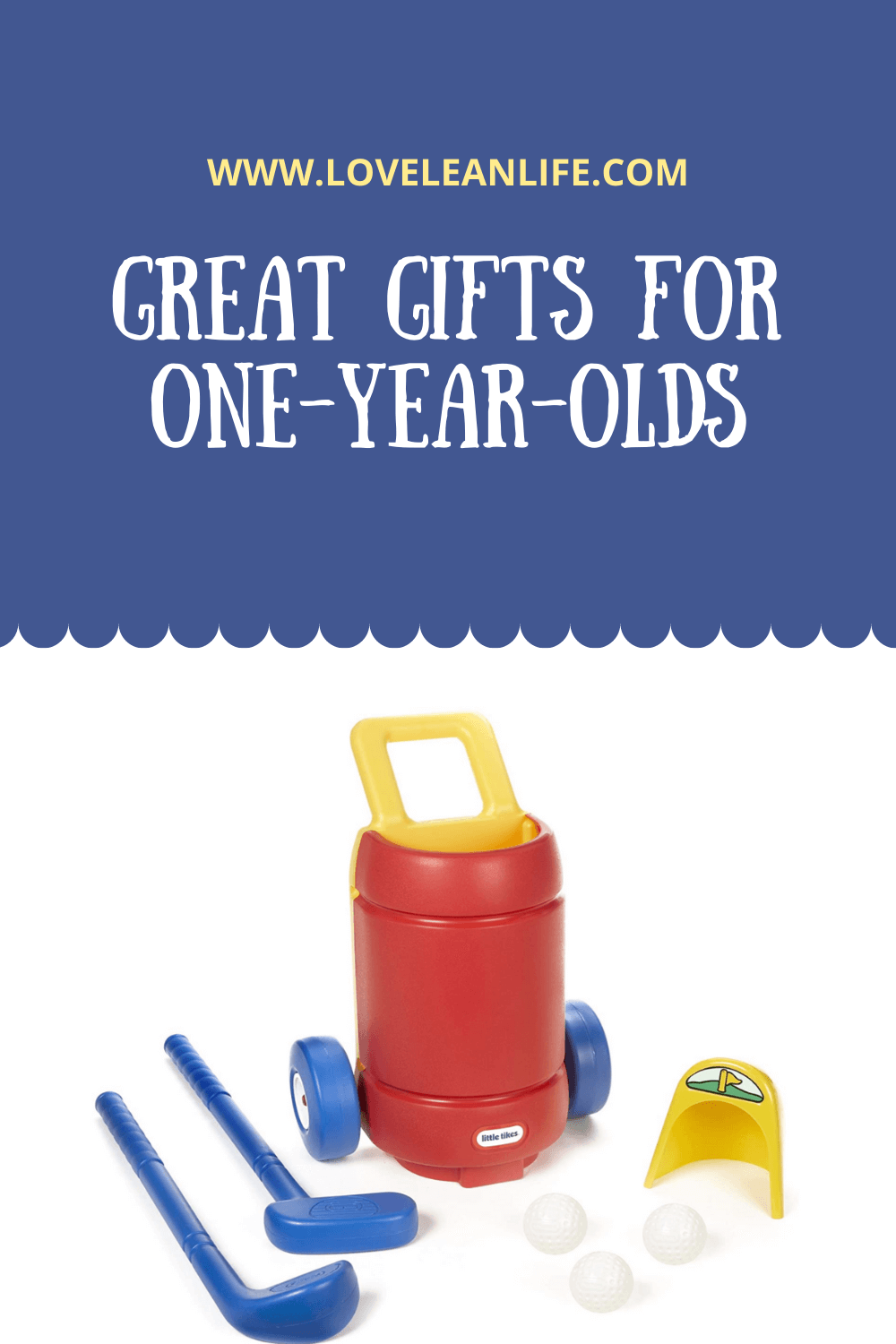