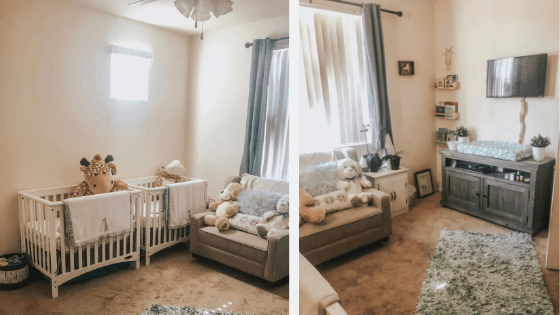 When planning for one baby I had everything all laid out. I envisioned this sweet nursery and lots of mats and interactive toys stationed around the room. When we found out we were having twins my big nursery seems to shrink in size before my eyes. Cribs are huge! Now put two in a small room with two rocking swings and there was no place to walk in our little nursery.

I went on other blogs to see what moms found they could do to make twin life in their nursery the most effective. I found amazing options that saved room and also helped keep everything in twos more manageable. If my husband and I wanted to rock a baby, did we have to share one glider or make space and find the money for two? I answer all the questions below with the very simple yet effective solutions we found!

What we bought after advice from other twin parents: 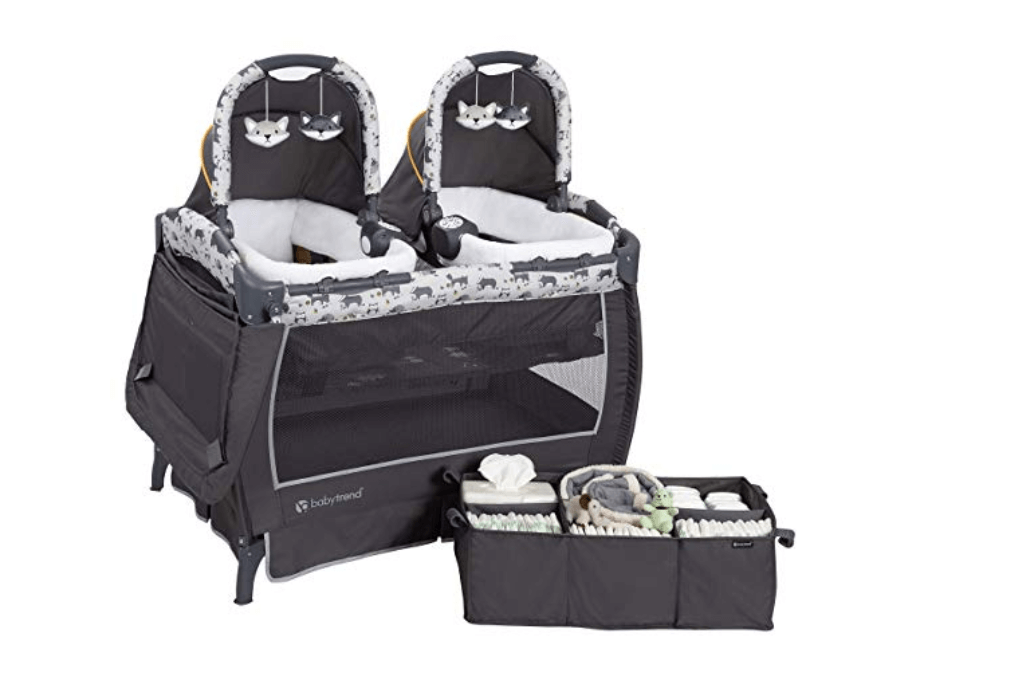 I wanted the twins to sleep in our room for at least the first 3-6 months. I had planned on the beautiful Moses basket that was long and could double as a lounger when taken off the wooden base. They even had a rocking version you could get. But after doing some measuring I realized I wouldn’t be exiting the bed on that side with the sheer length of two of those nestled up to the bed.

I found a Twin Pack and Play that originally I had not even considered for sleeping options for them. I knew pack and plays were great for having a diaper changing place and a little bassinet for one but didn’t even know they had a twin option!

The twin option comes with two bassinets on top that the babies can sleep in. Each bassinet also pops out so it can be used in other places around the house and the set includes a diaper changing table that can be swapped in when needed.

It’s much more compact than two separate bassinets and has the changing station combo. It will also be nice when the babies are sitting up to have a place for them to play in as well. All in all this one proved to be a multiuse, space saver that I’m glad we got on our registry! 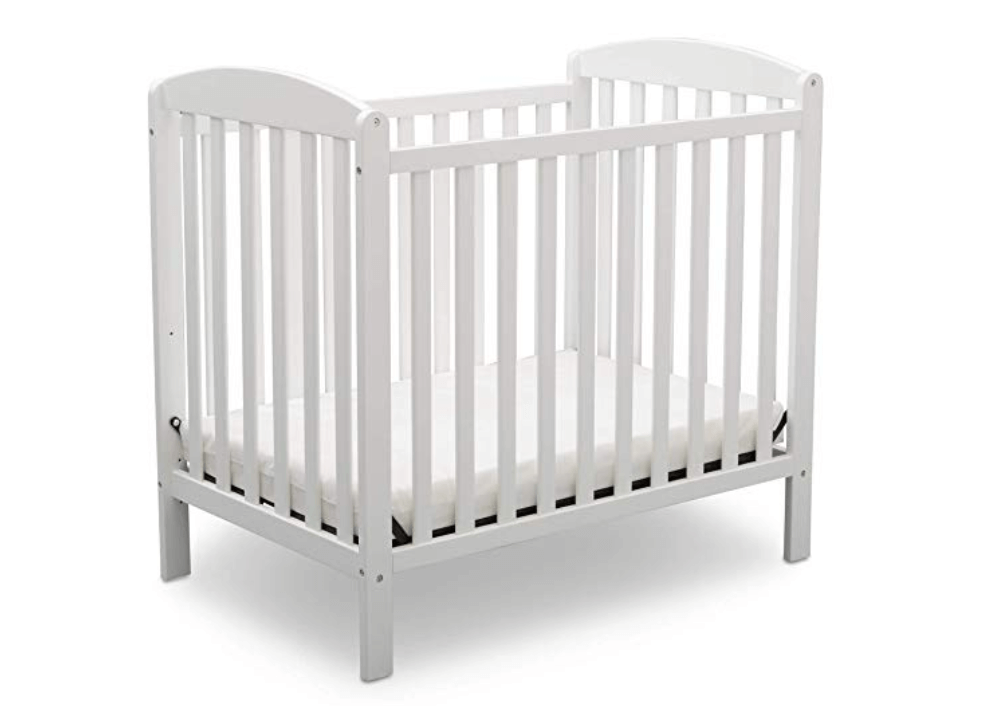 Cribs are huge. I said that before but I’ll say it again because I had no idea how much space they took up. While we don’t have a tiny room for a nursery, we sure as heck don’t have a big space. So coming up with a configuration of cribs that also still allowed us to have floor space was not easy.

A friend of mine told me she was friends with a mom of twins who used mini cribs. They are a bit smaller than the standard size cribs and can actually fit through most standard doorways when assembled.

The one hesitation I had was how long they could sleep in the mini crib for compared to the regular cribs but that woman with twins sent over photos of her twins in the cribs at the ripe old age of two and they still had plenty of room to go. SOLD!

So we ended up with a set of two white wooden mini cribs that are side by side along the wall with plenty of space for us to open the closet and still have the floor space we needed.

Mamaroo and Swing and Rocker Combo 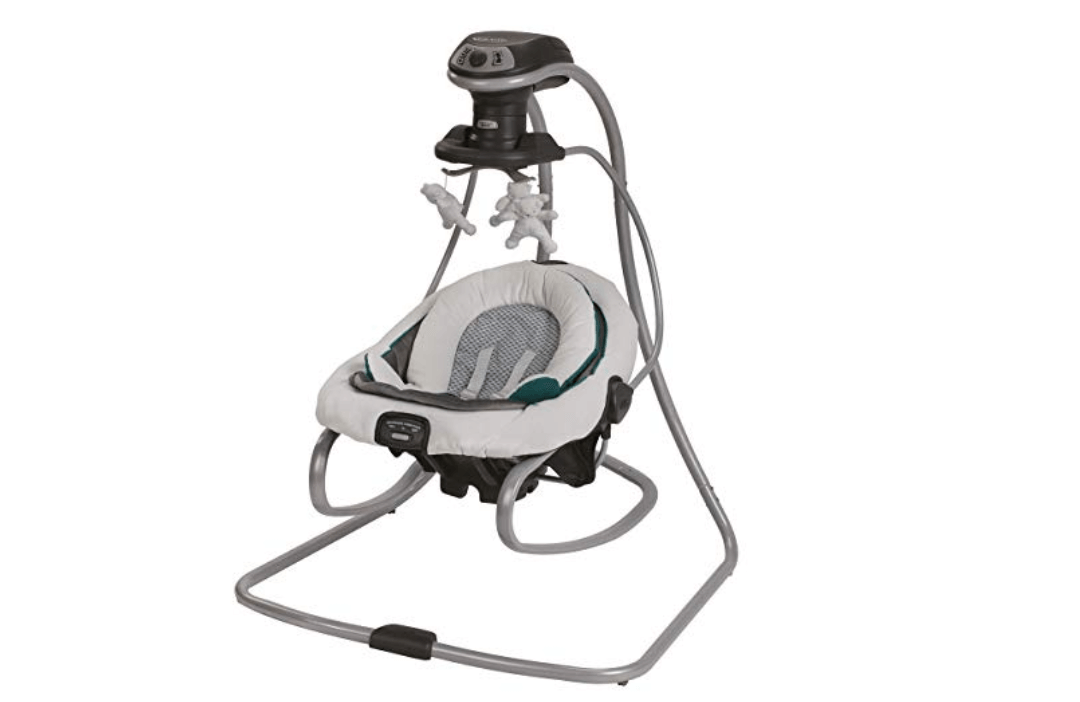 What will soothe your baby?! I have heard plenty of horror stories of people buying expensive Mamaroos and their babies hating them. What if we bought two and neither of the babies wanted anything to do with them?

So upon the advice of a lot of other parents we borrowed a Mamaroo from a friend to make sure the babies like it and registered for a rocker swing combo so we had options. If one baby likes each or they both like both options that would be perfect. In the chance that they both hate one, then we can just find someone else to love it and get a second of the options that they do like.

We now have one Mamaroo and one Greco Swing and Rocker Combo for them to try out and *hopefully* love. 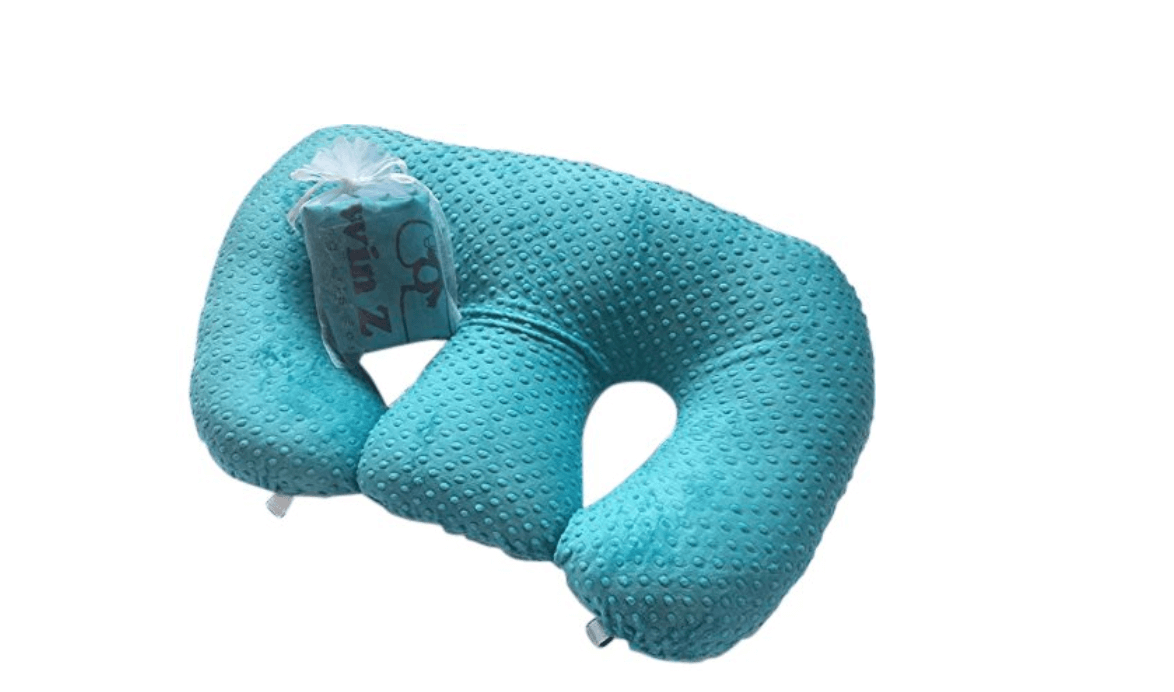 The boppy is by far the most popular nursing pillow I came across for nursing and baby lounging. I considered getting two since it was very versatile but also seemed like a lot of pillows to be carrying around. I liked that it made tandem feeding with a bottle easy but did not seem very helpful for tandem breastfeeding.

Then I came across the Twin Z Nursing Pillow. This pillow is set up like two Boppys put together with a middle insert that you and lift up and use when nursing. The pillow doubles as a nursing wrap around pillow for twins as well as a double lounger if it’s just on the floor.

While it was more expensive than the 2 Boppy’s I like that it doubles from a tandem breastfeeding pillow to a double lounger for the twins. So that convenience was worth a little more. Plus, just like the Boppy, you can change the covers on the pillow and swap them when they get dirty or if they get ruined. 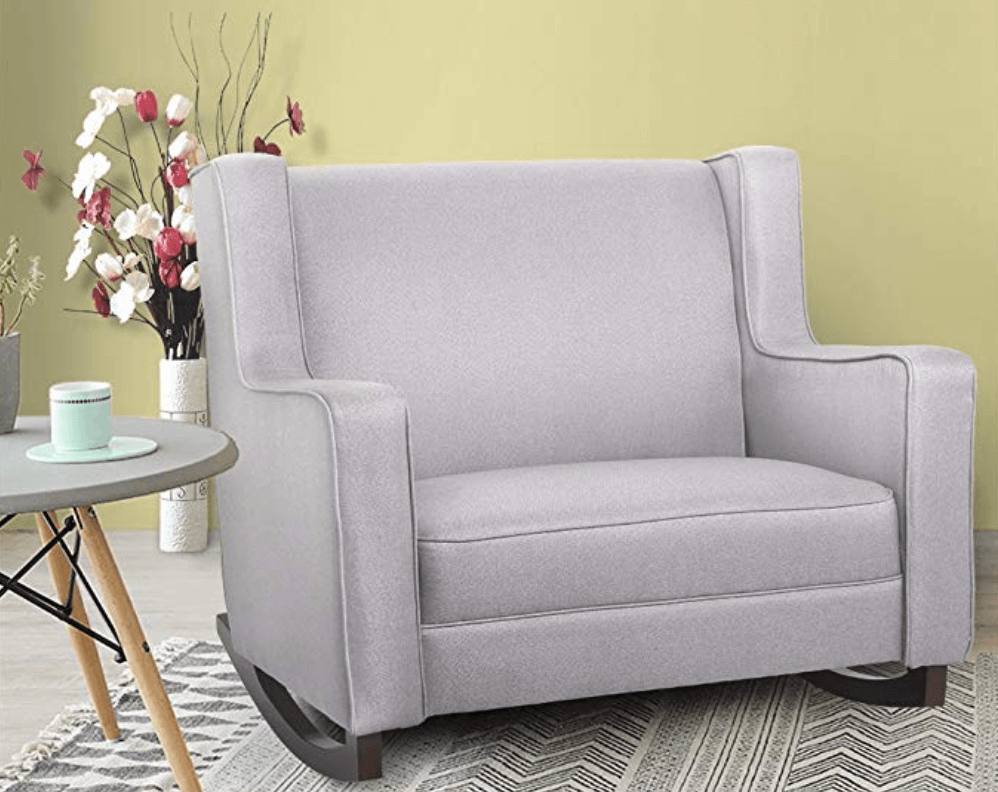 The last piece of big furniture we got for the nursery was a rocker. I came across a double rocker in a photo and decided to check it out. It’s basically like a rocking chair plus a half. The other option I saw was a small love seat but due to size constrictions in the nursery, neither that or two separate rockers were going to fit.

The double rocker was a good middle ground. It was still the traditional rocker I wanted but allowed enough room for me to sit on it with the giant Twin Z Nursing pillow to feel the twins in tandem in the chair. A traditional rocking chair could not accommodate both and I’m happy I went with this one!

Plus both my husband and I can sit on it if we want to although I don’t see that happening very often. I’m pretty sure we break the weight limit of the chair at that point anyway.

Overall we got a few twin essentials that I was most worried about to help us save room and make everything easier with the two babies. I’m so happy I checked in with other twin moms and found what worked for their babies. 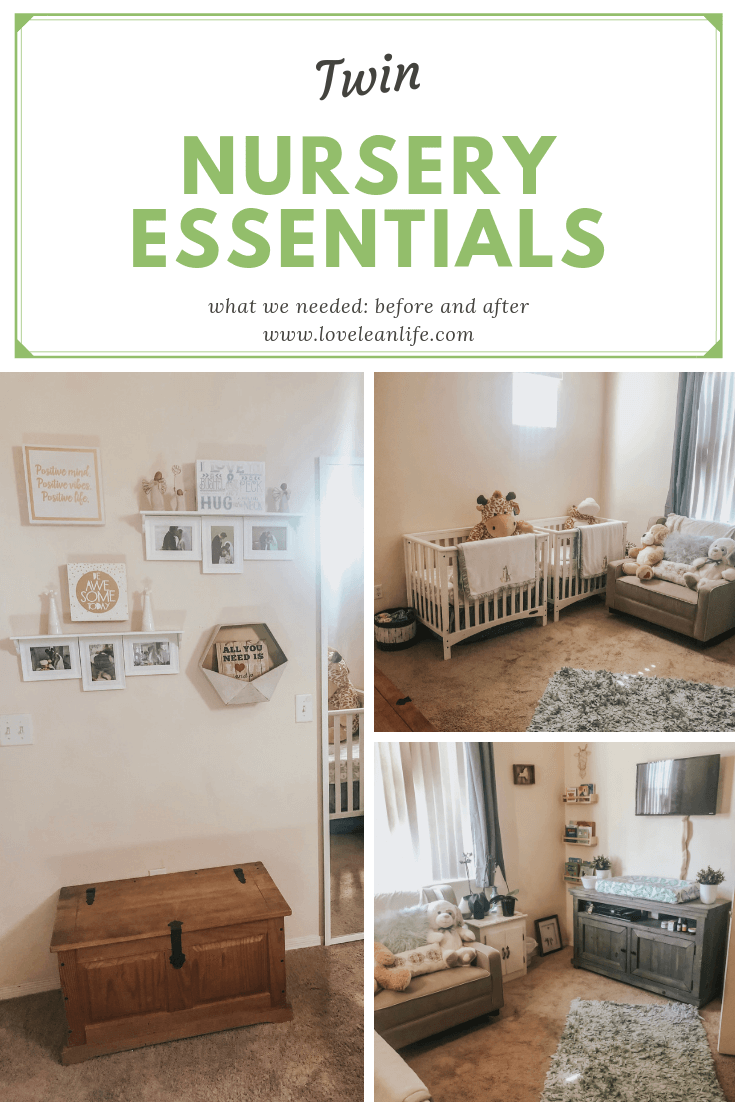 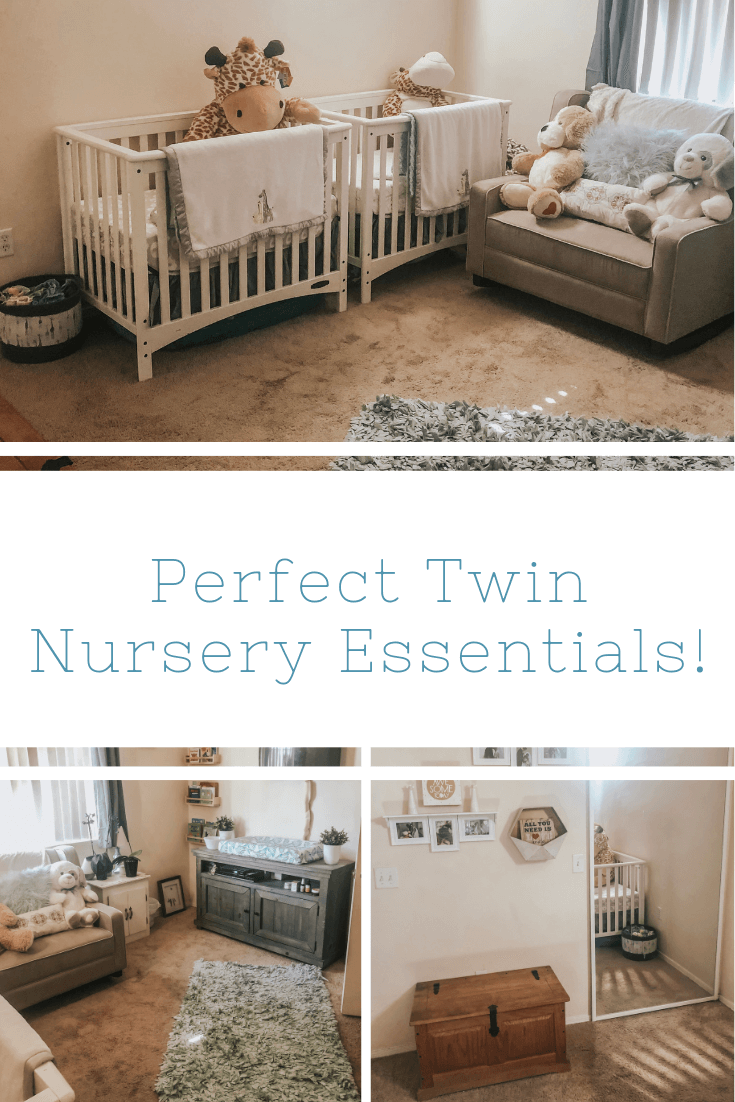 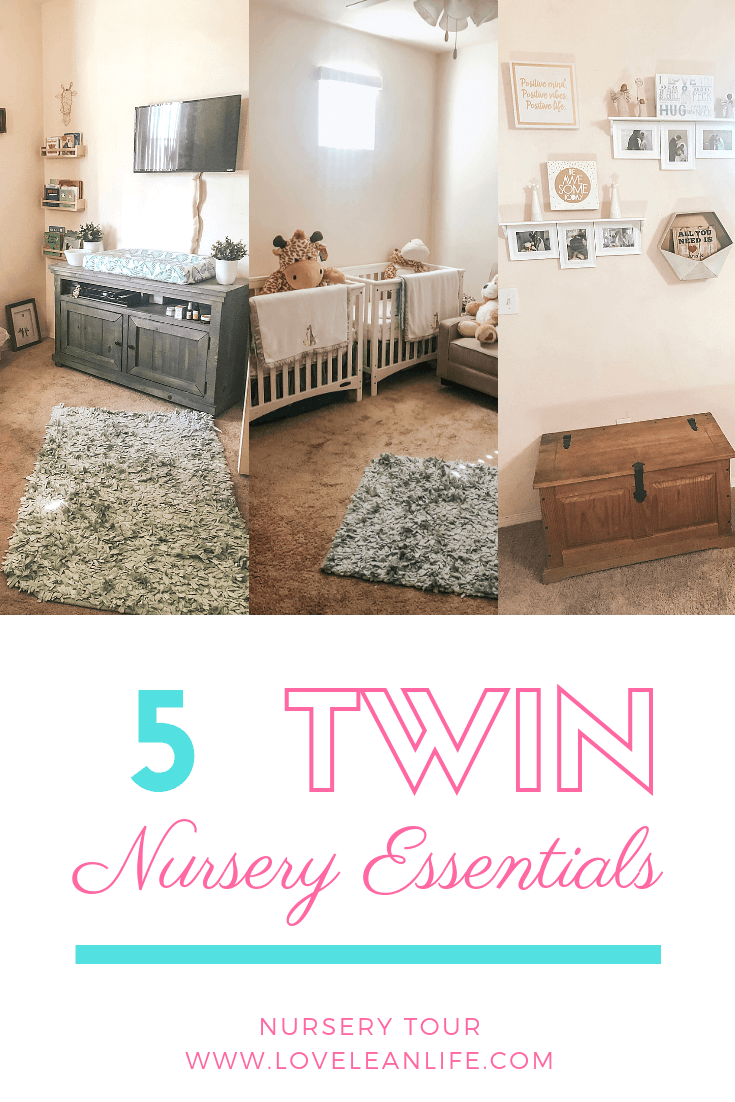